Three men blast off in a rocket ship with a plan to be the first humans to set foot on the grey powder surface of the moon.

We recently watched the 2019 documentary “Apollo 11” which features beautiful colour footage and photos of the Apollo 11 mission to the moon. They tell the story in chronological order with original audio, restored images and unseen footage from the archives that make it feel less like a relic of the past and more like the amazing undertaking it really was.

What struck me is how they accomplished their goals without the technology available to us now. At first glance, even some of their equipment looks a school science project: contraptions made of thin metal rods, hobbled together with sheets of foil gift wrap reinforced with industrial aluminum tape.

How did they do it?

How in the world did they send three men to the moon in 1969, before the advanced computers and robotics we have today?

I realize I am ignorant of much of rocket science and the years of planning and preparing for a momentous mission like sending humans to the moon, but one thing I know for sure – imagination must have played a significant role in moving the mission forward.

If you cannot imagine doing something, you will not succeed in accomplishing that goal.

Who thought, “hey, I know, let’s send people to the moon!”? Who imagined what it would take to make it happen? Who had the passion for math to calculate the exact trajectory and invent the maneuvers it would take to make the mission a success? Who saw Neil and Buzz and Michael and said, “these are the guys!”?

I was reading about Ancient Sumeria, a civilization from long ago that literally invented the wheel. No one has bothered to reinvent such a design because we don’t need to. We still use the fundamental shape today in almost every area of life.

There is something about the human imagination and ability to create and build and discover and explore that hints at something so much more.

Could it be that the great accomplishments of humankind point to the Creator of all things? Could it be that God allowed people to do great things out of the depths of His grace, as a glimpse of the great things He is already doing and will do in the future in our lives and with our world? If we, with all our human limitations, can do things like send three guys in a handmade rocket ship to walk on the moon and put rocks in their pockets to bring home for show and tell, wouldn’t it be possible that God, who has no limitations, could create and orchestrate and communicate and participate with His creation?

Humans are made in God’s image (Genesis 1:27). We have His capacity for relationship and understanding and creativity. And even the great things we accomplish are nothing compared to what God has already done and what is He is in the process of doing.

However, as it is written:
“What no eye has seen,
what no ear has heard,
and what no human mind has conceived”
the things God has prepared for those who love him —
these are the things God has revealed to us by his Spirit.
The Spirit searches all things, even the deep things of God.

Lord, give us eyes to see Your work everywhere and help us to wait with baited breath for the things that are still to come!

The January 2019 Lunar Eclipse as seen from my perspective.

The sun is shining invitingly with no great warmth to offer. For many days we’ve been saddled with temperatures far below seasonal, contending with vehicle trouble, slippery roads and dangerous windchill warnings.

Doing anything in extreme cold presents a fair amount of challenges, especially since it was such a quick switch. Our winter had been unseasonably mild up until the day before the polar vortex blew in.

I open the front curtains, harnessing some of that precious and wonderful sunshine. Most days it warms the room so much that the furnace gets a bit of a break, but on a day where the high is -21 degrees Celsius with a windchill of -30 it’s more for the wonderful dose of vitamin D and the way the light boosts my mood.

In the middle of the frustrations of extreme cold, I’ve been struck by its strange, otherworldly beauty.

Sunrises and sunsets have a soft rose-gold hue. The glowing quarter moon is perfectly clear against the inky black of the cold night sky, the outline of its mysterious dark side now visible from the ground. Millions of stars sparkle in their constellations as billowing clouds and thin curls of chimney smoke rise slowly from all the houses and buildings below. Streetlights illuminate tiny diamonds floating in the air; ice crystals that settle gently on everything they touch, giving trees and roofs and cars and fences a beautiful frosty kiss.

The snow crunches beneath your feet as you walk – the orchestra of snowflakes.

It makes me grateful for the small things that are suddenly big things: thick socks and warm boots on my feet. A jacket that keeps the wind out. The handmade scarf from my mom, the big old “garbage man” leather gloves from my brother, and the Canadian wool hat I picked up on a whim while out shopping a few years ago. The hot cup of coffee I’m sipping out of a clean travel mug while I drive a fairly reliable vehicle around a city where crews work non-stop to clear and sand wintery roads.

A home to return to where I can turn up the furnace, put on my slippers and favourite sweater, and cook a hot meal to enjoy with the ones I love.

There is much to be thankful for, even in the middle of the longest cold snap in decades.

I write this down so that I can remember to choose gratitude the next time I am running late, crouching down in a -40 windchill at the gas station, my frozen fingers clumsily attempting to fill my tires with air.

There is beauty in even this season.

This summer I’m taking some time to recharge, so my posts will be a little shorter, but I’m still here!

I’ve been amazed by the sunsets this week. They are breathtaking and photos simply do not capture their full beauty. And yet, I’m always out there, trying to catch them with a lens!

The other day, this particular part of the sky was stunning! I couldn’t believe that a 10pm sky looked like this. 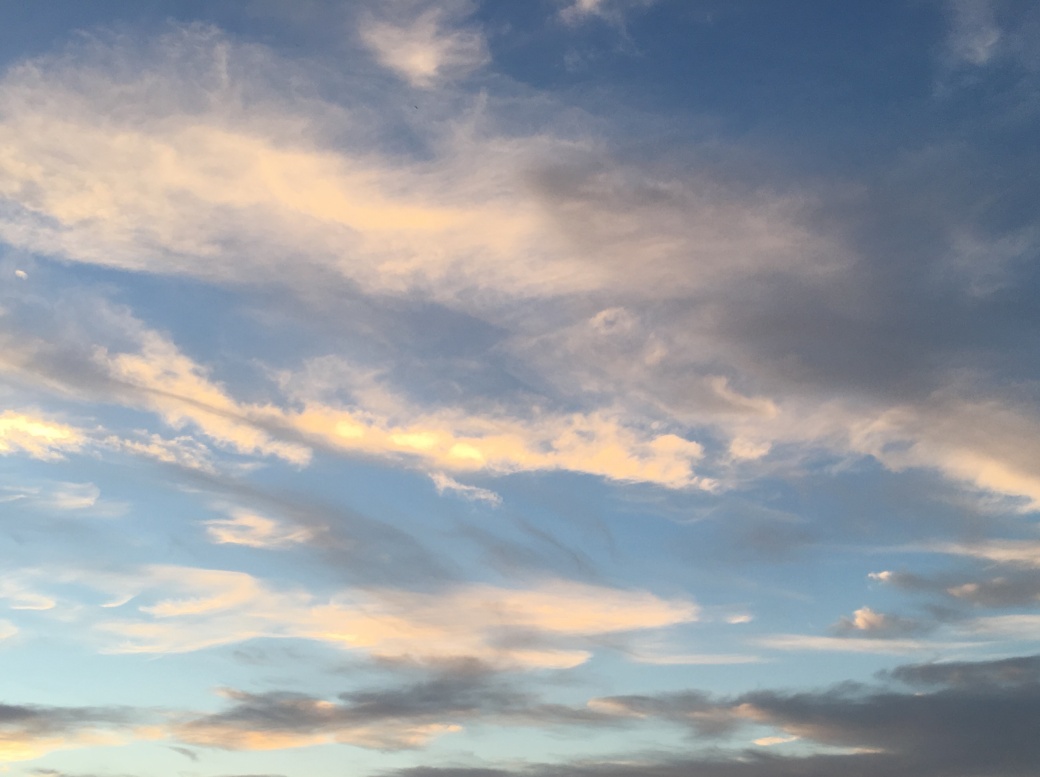 “The heavens declare the glory of God; the skies proclaim the work of His hands.”