The Time Machine series features posts from years past.

Today I’m sharing something from just last year, something that I’m still learning moment by moment.

The little clay sheep was unrecognizable. But for once in my life I was happy to leave it alone, instead of “fixing it”.

We had this brilliant idea of making our own Nativity set this year out of air-dry clay. And by “we” I mean me. My oldest asked if we could bring out the clay and make something together. But what? Christmas is coming so I suggested we make Mary and Joseph and Baby Jesus. That, of course, evolved into the whole cast of characters.

First, we made the stable out of an old cereal box and brown construction paper and the girls drew and cut out the Star of Bethlehem. We’ll glue that to the top later on.

Out came the clay. She worked on Mary as her younger sister squished Baby Jesus flat. I helped her make him more like a little swaddled baby and she used a green toothpick to carve out his eyes, nose and mouth. Then we worked on the manger and Joseph. I watched as she took that toothpick and again carefully shaped his features.

At one point, the oldest paused to survey her Mary. “This doesn’t look how I thought it would.”

Sometimes the kids have these one-liners that pretty much sum things up in general, you know? haha! But I digress.

“We need sheep!” she cried. She formed a sheep out of several balls of clay, and her sister squished and poked her lump of clay into something that did not resemble a sheep at all.  But there it was. Done for the day. We’ll add the shepherds, angel and wisemen later.

When I suggested we make our own Nativity set, I had a sneaking suspicion that I wouldn’t be getting perfect figurines fired in our old-fashioned kiln, hand-painted with the greatest detail and then placed in a fine cedar stable with fresh straw from the neighbour’s farm.

Nope. More like little clay blobs, one with arms outstretched, standing in an old Cheerios box, awaiting a coat of cheap poster paint.

I don’t know why I see such beauty in the plainness of life, but when I looked at that “craft” on our piano later that night, I was amazed. My daughter’s Mary has her arms outstretched, as if she’s worshiping. Surprisingly, it really touched my heart.

To a bystander, it probably all looks ready for the heap. When I tried to move Joseph his arm fell off – so we’ll have to figure that out. But you know, when I look at these figures, I see something infinitely more valuable than an answer to that internal question “have you done something with the kids today?”.

Of course I see all the important things – spending time together, enjoying their creativity, celebrating THE best time of the year, teaching a true story about Jesus.

But I also see evidence of God’s amazing power to free someone from the prison of perfectionism.

Since becoming a mom, God has been whittling away at my perfectionist tendencies and my desperate need for control of all the things. These little clay blobs mean more to me than a thousand perfect Nativity sets. They stand for the gradual transformation from a tough to tender heart.

MY well-controlled life has become OUR beautiful, messy life.

MY orderly home has become OUR lived-in home.

What freedom I’m finding in this brand new place! 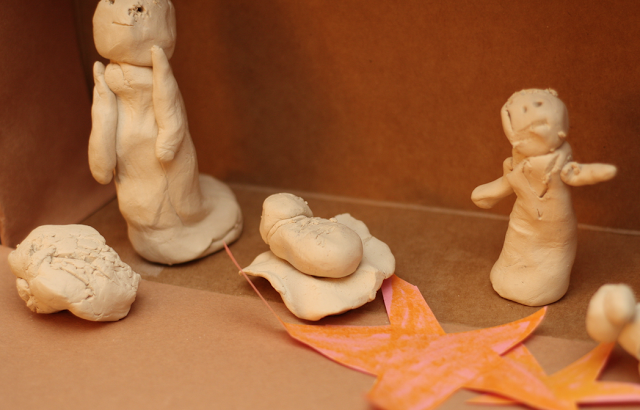